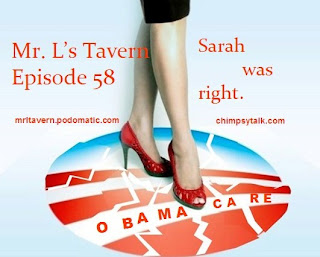 In this show: Sarah Palin was right on about the death panels and is vindicated. this week's revelations that the death panel legislation, dubbed as "right wing paranoia" by the shills in the media actually existed was snuck into the bill a year later. Is Palin's political star rising w such a revelation? Why Libertarians make me drink. Obama's end of the year "victory" press conference and why Obama reminds me of HG Welles "Invisible Man" and more. 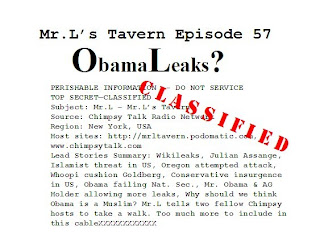 The third Wiki Leaks leak! Does the Obama Administration have something to do with the leak and/or are they enabling hacker Julian Assange? Is this part of a bigger conspiracy against America and a push to shut down the internet? Obama cannot understand why anyone would think he is a Muslim. I’ll give him a few ideas why. The Oregon Muslim Christmas Tree bomber and the growing Islamist domestic US threat. What happens when the US gets attacked by a nuke. Sarah Palin. Bonus: For the Chimpsy Talk hosts and CRN aficionados—I tell two fellow talkers to take a walk. Thanks for listening
Posted by Mr.L's Tavern at 8:43 PM No comments: