Normally, I do not tap into the conspiratorial annals of my mind, nor do I take the “doomsday” approach to national/world issues. Yesterday, I couldn’t help myself. While driving to an afternoon appointment, I tuned into Rush Limbaugh. The conservative talk radio host discussed union thuggery and Democrat shenanigans currently unfolding in Wisconsin, Rhode Island and Indiana. He also spoke about President Obama’s recent proclamation to not uphold the Defense of Marriage Act (DOMA). Limbaugh was basically outraged at the fact that Obama and Attorney General Eric Holder, for now, could get away with such a thing. Then he engaged in a little fantasy scenario. However, I will explain how his fantasy became my nightmare after you read what Limbaugh said:

Imagine President Palin decides that she will not comply with federal court rulings that she disagrees with, as in Florida and Louisiana. Imagine, if you will, President Palin meeting weekly with CEOs of the oil industry, of the insurance industry, and of the health care industry in order to help them profit and prosper. Imagine if President Palin meets with these groups to try to repair the damage done by the previous president, Barack Obama. Imagine a State of the Union in a House of Representatives chamber: President Palin attacking the sitting justices of the US Supreme Court, humiliating them for a ruling in a case in a manner that she disagrees with.

Imagine President Palin hiring a fashion person and putting her on the public payroll and telling everybody what to eat while she and Todd eat whatever they want on trips to places like Vail, while her husband is eating hamburgers and fries and ice cream. Imagine President Palin sending her kids to the most expensive private school in Washington, while at the same time killing a school choice program for poor minorities in the inner city of Washington -- and, folks, I could go on and on and on. It explains everything, this sickening spectacle that is the left.”

Christie 2012? I Don't Think So. He's wrong on radical Islam, Ground Zero Mosque, Presides over a NJ Cap and Trade Law, wrong on immigration. This and much more. If you're on the Christie 2012 bandwagon, you need to do your research. At best, Christie is a moderate hiding behind the no labels mantle. At worst, he's simply a liberal Republican who shifts with the wind. Gov. Christie, STAY IN NEW JERSEY!

This is who Sarah Palin is. Smart, plain speaking, witty and articulate. Not how the liberal media portrays her. Not how a mind slut like Katie Couric portrays her in an edited gotcha interview from 3 years ago. Watch the whole Q & A session from her appearance at the Long Island New York Association.
February 17 2011
Questioner: Kevin Law, a Democrat

Mr.L's Tavern Episode 62: While We Fight, They Plot. 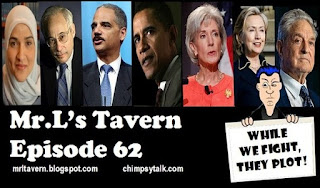 While conservatives fight, the Marxists plot. The tale of two frauds: Ron Paul & Donald Trump at CPAC & why any of them cannot be taken seriously, let alone, win. Why is Rand Paul & the GOP devoting their time tweaking the Patriot Act & not destroying ObamaCare? What ObamaCare will look like in 2050. The Islamic Theocratic Federation, or, beginnings of the Global Caliphate in the middle east and more. www.mrltavern.blogspot.com 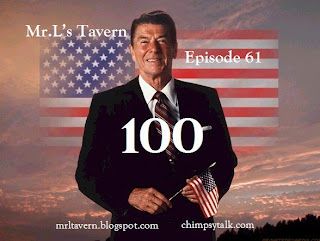 Celebrating what would have been 40th President of the United States Ronald Reagan’s 100th birthday this week! The liberal media presstitutes are now comparing Barack Hussein Obama to Ronald Reagan. I don’t think so. For decades, these presstitutes have tried to destroy Reagan’s legacy. Now they try to steal it and give it to Obama. I pull that lie out of the mud by it’s roots in this episode. My thoughts on Egypt and more. You won’t want to miss this show. Happy Birthday Gipper, where ever you are!