In this segment, I confront two Rush Limbaugh callers: one bizarre caller who claims "we need to get behind Mitt". The other Vinny from Queens who doesn't want to support Palin because he feels she's been "destroyed" by the midstream media. If the GOP runs a generic republican who either loses OR doesn't keep his promises the GOP is over. Palin will most likely run for president. Dems & Obama camp terrified. Obama camp thought Palin "was trouble" then. Guess what, she's still trouble.
Rush clips provided by www.youtube.com/mrtimotheus85

The Definition of Insanity

The old saying goes: The definition of insanity is repeating the same thing over and over again only to get the same result.

That old saying could be applied to the Republican Party.  I am a conservative but a registered republican ever since I became of legal age. I have never supported, voted for, nor would I even consider becoming a Democrat.

With the 2012 election already being speculated on, I am beginning to see hints that the GOP may be repeating the same insane things when it comes to national elections—backing and nominating the wrong person to run against the Democrat.

John McCain, who had a history of non partisan “reach across the aisle” politics, was supposed be the candidate who would appeal to these voters.  Yet in 2008, it wasn’t the Black or Hispanic voter who carried Obama to finish line.  It was the independent, white voter.   They are partly responsible for placing this country in the danger that it is in now.   Many of them voted because they had Bush hatred.  Even though they voted for conservative and Republican politicians in droves in 2010,  some polling suggests they may want to give Obama another chance in 2012.  As I and other good conservatives stated time and again, that is a disastrous prospect.

Now let me give you two scenarios which would drive me to leave the GOP--perhaps temporarily--and become a registered independent with conservative leanings.

What If Sarah Palin Did or Said...

So far, I'm dissatisfied with most in the current crop of Republican 2012 candidates and waiting for the Sarah Palin show to begin. Lets play a game called "IF SARAH PALIN DID OR SAID THIS..." come play with me and listen.
Posted by Mr.L's Tavern at 10:44 AM 8 comments:

This is the perfect example of why this man will never be POTUS. Ron Paul freak followers go away from me. Take Ron Paul and go to hell.

Why is Obama Inviting a "Common" Dirtbag to the White House?

my take on Obama's decision to invite rapper Common to the White House.  Similarities between Obama & Common. Obama squanders victory to divide the nation on immigration & race.

Osama dead, shot in the head. Now the anti war Obama is trying to take credit for it. It was our troops, Intel and Bush policy, in particular the controversial policy of water boarding via enhanced interrogation aka rendition, that led to the killing of Osama bin Laden. How the media covers the killing. White House rally of college students was only about Obama. Where's the photo of Osama? Where's the video of him eating lead? Why the Islamic burial in the sea? These questions and more.
click on the player for the show: 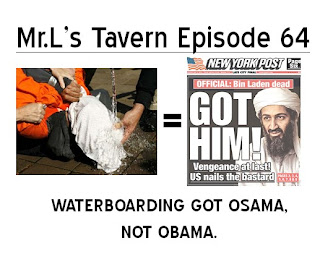