Sources Say The Sources Are Full of S**T


"Sources" say Christie now running for president. Again. Sources say sources are full of shit. Why are the GOP establishment throwing shit at the wall to see if it sticks w/ all of these various pop up candidates? Do they hate Sarah Palin that much they do not want her to run?
Posted by Mr.L's Tavern at 5:11 PM No comments:

I Wait For Sarah Palin Because She Never Told Me No


Why do I still wait for Sarah Palin to get into the 2012 race? Very simple. Unlike Chris Christie-- she's never told me that "NO" she wasn't. Doubting her in the 11th hour is in my opinion counter productive.
Posted by Mr.L's Tavern at 1:48 AM No comments:

Los Angeles gay leftist Stephen Hanks and friends try to teach Bristol Palin tolerance. Major Fail! They call her mom, Sarah, a whore. Bristol confronts them. This fine young lady seems to possesses the same magic her mother does: Every time she's attacked, it comes back to them.  "Your enemies will try to destroy you with everything they have -but God's going to turn it around for good"

UPDATE: Apparently, Mr. Hanks is a washed up talent agent or manager lost in the shuffle deck of Hollywood's agency system. I'm guessing he has one client that keeps his shell company running. Stephen Hanks Management, Inc. (323) 656-1884
Posted by Mr.L's Tavern at 4:26 PM No comments:


Sarah Palin now tied w/ Obama in some polls. Her popularity, name recognition, fund raising ability places her as a first tier candidate but her message against crony capitalism & conservative tea party populist makes her a force to be reckoned with. WAKE UP GOP!
Posted by Mr.L's Tavern at 10:04 PM No comments:

Apparently former ward of the state, rapist & bi polar washed up boxer Mike Tyson made some disgusting remarks about Sarah Palin on ESPN. Jeff Poor & the Daily Caller decided promote the story & rumors as truth. Glenn Beck & hack comic also take a shot at Sarah Palin. Attacks from the left I expect but those from the right sicken me.  Note to these so called conservative pundits and to those who currently supporting other candidates:  You may want to re think some the trashing that you're doing at Palin and her supporters expense. Because if she does not run, you're going to need her and her supporters in order to beat Obama.
Posted by Mr.L's Tavern at 4:28 PM No comments:

My Letter to the L.A. Times re: Sarah Palin Rumors

This is an article that I wrote today to a journalist at the Los Angeles Times regarding Joe “the plagiarizer” McGinniss book about Sarah Palin. They published an article about it here. This wasn’t only meant for this particular writer.  It was also intended for other mainstream “credible” news outlets like the Times and NY Daily News who felt the need to jump on the rumor wheel.  Version available in audio as well.
Dear Mr. Ulin,

I read your article regarding Joe McGinniss and his upcoming book “Rouge” that is rife with salacious lies, innuendos and rumors.  I have to say that the real story here isn't whether or not Sarah Palin snorted cocaine off an oil drum when she was in her 20's or if she had a romance with basket-baller Glen Rice while unmarried.  All of which, I can assure you will never materialize and catch fire simply because—those who really know Sarah, the Heaths and Palins, know they're all lies.  No, the real story is how many of you so called credible and reliable journalistic organizations ran with the story which is based on quotes from "friends" and "those close to the Palins", weak sources and such.
While you tried to remain objective in the article, you're ideology as a leftist or somewhat "third way" progressive came through as there are many flaws in your reporting.  You used a quote from Zane Henning insinuating that Palin is a fake conservative because she doesn't perform acts of charity to the organization Henning prefers.  You left out the fact that Gov. Palin has devoting her time and resources to the organization "Samaritan's Purse" as well as other charities for years.
You also forgot to mention that Joe McGinniss has been caught plagiarizing other writer's work many times in his career.  Venerable editor and publisher Roger W. Straus, president of Farrar, Straus & Giroux, once said about McGinniss in 1993, ''Will the public accept it when an author says, 'I'm selling you this book as a bio, but I'm also telling you that I made up a lot of stuff myself"?  I would think including this all important character flaw of McGinniss would be relevant when the author is clearly doing what Mr. Straus accused him of doing back then—making stuff up.

What Did We Expect from Joe "plagiarizer" McGinnis?


My thoughts on the ridiculous new book put out by Joe McGinnis serial plagiarizer about Sarah Palin filled with rumors, unsupported sources from "friends" "who know" Sarah & Todd and confirmations re: affairs by lol that credible BEACON of journalistic standards The National Enquirer. Enjoy.
Posted by Mr.L's Tavern at 1:16 AM No comments:


While I'm not a supporter of Rick Perry, I found it disingenuous & hypocritical of Jon Huntsman to call Perry treasonous over the issue of immigration. Huntsman called the idea of a border fence "repulsive" back in May 2011 in New Hampshire. He's nothing but a double talker, is down in the polls, an entitled Rockefeller Republican RINO & needs to get off the stage now.
Posted by Mr.L's Tavern at 6:40 PM No comments:

Mr. L's Tavern special 9-11 Ten Years Later show. This is not a day of "service" as Obama says, but a day of remembrance & mourning. Many topics covered. Special guest DC of Chimpsy Real American to talk about his online crusade against Ron Paul & his Paulians. NEVER FORGET! 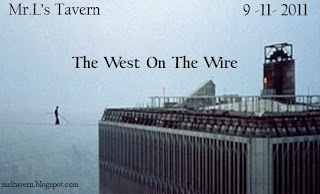 There's Something About Sarah...

I’m writing this in lieu of doing an audio podcast because I’m putting the finishing touches on a special 9/11/2011 show that will post on this site early Sunday morning.  I think you’re going to like it, so stay tuned.
Yesterday, a Twitter follower of mine sent me an article and wanted to basically know what I thought of it. It was an article out of the Alaskan Dispatch titled, “Sarah Palin’s Right to Choose” by Amanda Coyne. The article was somewhat fair, however, you can detect there’s some bias and animus towards the former Governor within the article.  How can you tell, you say?  The obvious use of the word “quit.”   Coyne should at least extend the respect to a former head of state and use the proper word “resign.”
But as I’ve said before, when you’re dealing with a liberal leaning press, Democrats and liberals resign.  Republicans and conservatives quit.
Reading Coyne’s line regarding the Governor’s resignation got my juices flowing.  Perhaps on that day back in 2009, when Governor Palin clearly explained the reasons for her resignation, was day one of her very unconventional campaign for the 2012 presidential race.  Palin knew that the media would immediately begin circulating the innuendos as to why she “quit.”  She would use this to her advantage.  After all, it’s normal for traditional hack politician to quit amidst an affair or scandal of some sort and disappears to the private sector or consulting world.  Or, they quit under the guise of--my favorite--"I have to go spend more time with my family."  But there were no scandals and she didn’t disappear.  In just three short years, Sarah Palin turned lemons into lemonade—as she’s done throughout her entire career—and now stands at the precipice of one of the most defining moments in her entire life.


Speaking briefly re: Obama's phony jobs speech. About that GOP debate on Wed. Photos circulate of Rick Perry getting too close to Ron Paul during commercial break. But why is MSNBC withholding the video and audio? I think I know. Frankly, after that debate I understand fully why Palin is waiting.
Posted by Mr.L's Tavern at 1:19 PM No comments:

Catty bitches Laura Ingraham & Ann Coulter bash Sarah Palin on Bill O'Rino's show.  Many idiotic statements made here, the usual-- Palin unelectable, quoting fraudulent incorrect Fox News polls about Palin, superficially making fun of Palin's voice yet providing no substance of their own about Palin and brazenly ignoring her record of reform in Alaska.
Posted by Mr.L's Tavern at 3:23 PM No comments: