Currently, I’m reading Ron Suskind’s new book Confidence Men: Washington, Wall Street and the Education of a President.  It is an eye opening story of the campaign to elect Barack Obama and the first three years of his presidency.  Many books like this have been written about previous administrations, as you may recall the Bob Woodward trilogy during the Bush years.  The book received the most publicity when the media picked up on the parts depicting Obama and many of his male cronies showing hostility towards women in his administration.  It also highlights how the monstrous ObamaCare bill was conceived, deliberated  and rammed through Congress.  A move that led to the revival of the conservative movement and the birth of the Tea Party.  Finally, it shows Obama’s incompetence, arrogance and downright dubiousness reminding us all what is at stake for this country if this man and his minions are allowed another four years.

One part of the book stood out.  It was in a chapter called “Filling the Void” and it is relevant to what is going on today with the leftist Occupy Wall Street movement.  When I read this, it spoke to me because it’s basically everything I want to say and more to these miscreants in this nation who call themselves “the 99%.”  What the hell is that anyway?  Do they even know?  I saw an image on Facebook today and it pretty much sums it up: 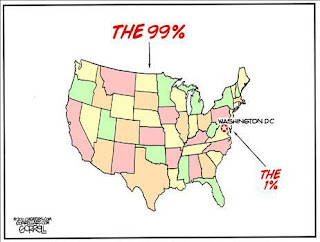 That’s right.  If these morons actually woke up to the fact that, the 1% is sitting in the White House and walking the halls of Congress and compounds of government, they would have the right message.  That’s the message of Tea Party. It’s very simple: shrink government and/or limit its ability to do mischief.  Remember the old saying, first do no harm. Until we get politicians and technocrats in the halls of government who really believe this—America is screwed.  We will continue down the primrose path to fiscal insolvency and will become a third world nation.