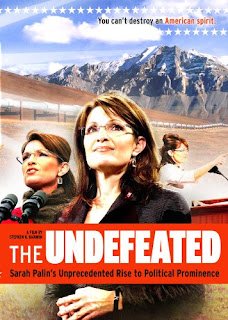 The Undefeated is a documentary about Former Alaska Governor Sarah Palin’s rise to political prominence.  Palin burst onto the national stage in 2008 running with Senator John McCain for the vice presidency of the United States. The documentary covers Palin’s political career spanning twenty years serving the state of  Alaska as Councilwoman, Mayor, Energy Commissioner and Governor.  It also covers her role in the historic elections of 2010 where she had a 67% success rate. Sarah Palin's endorsements yielded: 1 Secretary of State, 2 Attorney Generals, 6 Senators, 7 Governors and 37 Representatives into the House.

Sarah Palin was elected Governor of Alaska in 2006 after a corruption weary Alaskan electorate had enough of the good old boy establishment ruling over the state from both sides of the aisle.  Palin was the first female Governor of Alaska and had over an 85% approval rating.  She proved to be a hard charging corruption buster and reformer who took on her own party and passed one of the most complex and landmark energy and tax legislation in the state’s history.

By now, those who subscribe to HBO have seen the trailer for the upcoming original movie Game Change.  The film is based on a book by the same name.  The players involved in the making of Game Change have been exposed as Obama supporters and financial donors. The sources used in the book and  film are unsupported and unidentified.  The film’s portrayal of Gov. Palin has been panned by former agenda-less McCain aides as pure fiction.
Find ReelzChannel in your area.
About The Undefeated
Trailer
Top 10 lies in Game Change
Sarah Palin's PAC responds to Game Change
John McCain attacks Game Change
Cindy McCain says Game Change is fiction
Crafty Palin supporters pass out pro-Palin Playbill at Game Change D.C. premier
Top McCain aide: Palin didn't cost McCain the election

HBO's In-Kind Contribution to Barack Obama
Who To Believe? HBO or the Secret Service?
McCain adviser says HBO movie "lie"
Venerable John Podhoretz says Palin was back stabbed by McCain staffers
HBO did not tell a balanced story of the 2008 presidential campaign
Monica Crowley reviews Game Change
Palin aides go on the record to declare HBO’s Game Change a hit piece
HBO tried to trick Palin into endorsing a movie that trashed her
Liberal columnist Howard Kurtz not identifying their sources was a “recurring weakness”
Radio host and Obama 2008 supporter on Game Change: “It reads like fiction”
Democratic strategist on Game Change: “Its disgusting”