Never Forget It Was Obama Who Downgraded US & UK Special Relationship

The lame stream media is making a mountain out of a mole hill out of Mitt Romney's comments about the Olympics. Even some have the nerve to suggest the comment is damaging  to the "special relationship" America shares with Britain.  Never forget just who damaged that relationship in just 4 short years-- Barack Obama.  While I am no fan or supporter of Mitt Romney, I urge republicans and conservatives to not rush & take the media's bait. Romney's REAL gaffes is what he said--or didn't say-- to reporters in London and why you should be pissed about it.  It seems from the comment that Romney is still content on playing Mr. Nice Guy with Obama.

Is Mitt Romney and the RNC so stupid to make the mistake to not invite Sarah Palin to speak at this year's convention?  Judging from who Romney has in his campaign, is anyone surprised? An invite will allow her to top the RNC speech she gave four years ago.  No invite will solidify her outsider, anti establishment status. It looks like Mitt Romney is following in his father's footsteps in alienating the conservative wing of the GOP if this is true.  Either way it goes, I'm fine with it.

By now, you heard of the book "Poetry of the Taliban", where two leftist academics glorify the poetry of murderous 7th throwback Muslim Taliban. CNN also does a segment further glorifying this book, the Taliban and basically enabling homicidal, suicidal psychos. No shock that the American left is doing this--statist liberals & homicide bombers of the religion of pieces have a lot in common.  Please be sure you hang on until the end of this segment, where I read "Poetry of the Taliban-- Infidel Version"

On his Monday night show, Mark Levin re-creates Ronald Reagan's epic 1984 re-election campaign ad in the image of Barack Obama's past four years.  From "Morning in America" to "Night Time in America"

This week, a national disgrace occurred.  This is, in fact, a stain on the American military.  The highest military appeals court has upheld Army Ranger 1st  Lt. Michael Behenna’s conviction for the so called premeditated murder of a detainee and al-Qaeda-operative in Iraq named Ali Mansur. While Michael still could receive clemency, his legal appeals are now over with this latest ruling. Without clemency, Michael will remain at Leavenworth military prison until 2024.
Since Michael was convicted by a Kangaroo military court in 2009, the national media has essentially ignored this case.  Michael’s mother Vicki, has made appearances on his behalf in local media markets of their home state of Oklahoma.  She has also gone on a few national radio talk shows.  In 2010, I was honored to have her as a guest on my show where she discussed Michael’s case in detail.  That interview is included with this clip.
I would encourage you to visit www.defendmichael.com to read further details surrounding this case.  I encourage you to donate to Michael’s legal fund and to inquire about future plans to help get Michael clemency so that he could be released.   I also encourage you to send Michael a letter of encouragement and support at the address below.
-Mr.L

Palin vs. Christie & the Difference Between Serving & Lording

Garden State's Gavone Governor Chris Christie caught in his tough guy routine once again with a NJ resident on a Jersey boardwalk over the weekend. Sarah Palin supporters ask, this is who the GOP establishment thought was qualified to be President or VP but not Fmr. Governor Sarah Palin? I compare Christie's style to Palin's when dealing with the public at large. Is there any difference between Christie and big government statist liberals like Obama who prefer to "lord" over rather than "serve" the masses?

Things We Can Learn From Our Friends Preaching from the East

Currently, I’m reading Monica Crowley’s new book “What the BLEEP Just Happened?”  It’s a great read.  She’s got a chapter in it titled “The Skinny Socialist is a Big Fat Liar.”  Gotta love Monica for a chapter title like that.   Her last chapter “America Unleashed” pretty much tells the reader: while things may look bleak now—it’s not over.  I still haven’t been able to bring myself to believe America is over.  This country has weathered many storms throughout history.  In the long run, I believe that America will be able to shake what craven liberals like Obama have done to this country in the last four years.
Read more »
Posted by Mr.L's Tavern at 1:33 AM No comments:

I Called Obama a Degenerate Gambler in 2010

This week, Barack Obama visited swing states like Ohio where he told crowds that most voters would "acknowledge that he tried really hard"to fix the economy.  He then blamed Republicans and his predecessor pretty much more of the usual Obama yabba dabba doo.  I took immediate notice to Obama's lecture sign that reads: "Betting On America."  More like "Betting Against America."  In 2010, I called Obama a degenerate gambler who is gambling America's future away, much like a gambler would his families savings on the crap table.  Below is the clip from that show. Enjoy. -Mr.L 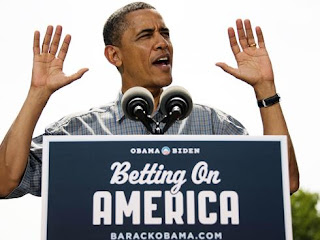