I don't know what pisses me off more, the fact that this is what is going on with our military or the fact that this video currently only has 160 views. EVERYONE should watch this video. EVERYONE who has a son who is interested in enlisting in the US Armed forces should watch this video. EVERYONE should share this video. EVERYONE should be outraged that this is going on right now. Stop with the damn conspiracy theories about the damn missing plane. Stop with the other damn distraction stories of the day. This is serious. Obama's rules of engagement are putting our combat troops in danger. Do you know that, in this touchy feely "win the hearts and minds" war that Obama and the Pentagon is fighting, Afghan jihadis are allowed to sit in a watch tower ON BASE, ARMED, while our soldiers walk about below UNARMED? Such an asinine policy led to the death of an American solider when an armed jihadi opened fire on the soldiers who walked below.
WHAT THE F%*@K IS GOING ON WITH THIS COUNTRY!!!!!!!!!!!

Sarah Palin rocks the house delivering the key note speech at CPAC 2014.  The former governor of Alaska lampooned the Obama administration by reading a conservative version of "Green Eggs and Ham."  Palin to the GOP establishment:  You didn't build that 2010 victory—the tea party did.  She told packed house that the age of Obama is almost over and there has been a great awakening in America.  Sarah Palin—who was right on a whole list of issues besides predicting Russian aggression in the Ukraine—is the leader of that great American awakening.  Palin's speech drew both praise from supporters and criticism from some in the media.  Also, a word about some "friends of Sarah Palin" who "love Sarah Palin but..." opinions and their online polls.
)
UPDATE:
Mark Levin discusses Sarah Palin's CPAC 2014 speech>>>


Since I posted the segments "The Reaganish Sarah Palin" back in November, some listeners/readers have asked if there will be ever be a part three.  I have no intention of doing a third segment and have often said that a third segment would depend on whether or not Governor Palin runs for higher office in a few years.
But I did find an interesting paragraph from a book that I read this weekend called "Kennedy & Reagan--Why Their Legacies Endure" by Scott Farris. The eerie paragraph describing Reagan during the years before he won the presidency in 1980 sounds like it could be written for Sarah Palin today.


Farris writes:
"Far from making him a pariah within the party, the fratricidal challenges by Reagan made him, more than ever, the undisputed leader of the conservative cause. Still, many in the media questioned whether Reagan's time as a viable presidential candidate had passed. By 1980, he had been out of public office for six years, though he remained in the public eye and ear through his television appearances, radio commentary, syndicated columns and multiple speaking engagements. Early supporter, businessman and conservative activist Henry Salvatori had been right. Reagan's appeal as a presidential candidate had not been based on his record as a governor any more than Kennedy's was not based on his service in the Senate, nor had it been diminished because it had been a half a dozen years since he held office."
When the 2015-2016 election cycle rolls around, it will be roughly six years since Sarah Palin held public office. She continues to remain in the public eye and ear via social media, Fox News, books and speaking engagements. Her record as a governor is stellar and whether one agrees, disagrees, or doesn't understand why she resigned due to cognitive issues, it doesn't seem to have hurt her popularity judging from polls published in recent weeks.

According to Gallup, she remains on the list as one of the most admired women in the world.
In case you missed it, you can listen to parts one and two of the Reaganish Sarah Palin here and here. –Mr.L 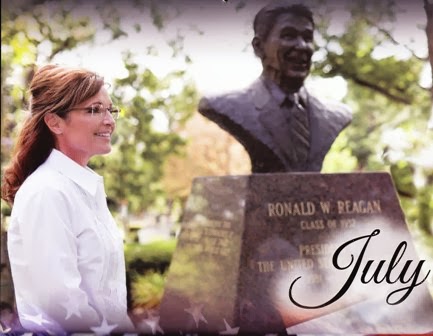