Did Trump and the Republican Establishment Make a Deal?

I'm trying to see beyond Trump's rhetoric of "the GOP establishment is out to get me" and the GOP/RNC's rhetoric of "we will destroy Trump."   I'm starting to wonder if Donald Trump and the Republican establishment have made some kind of agreement behind the scenes.
Let me explain...
We've been hearing from the media that the GOP establishment and their surrogates would begin an all out assault on Trump.  Some candidates who are in the race and their PACs were supposed to participate in this assault.  This was supposed to happen on Labor Day weekend, but there's been nothing.
On September 3rd, Trump did something that campaign watchers and his ardent supporters never thought he would do.  Trump signed a loyalty pledge to the RNC stating that he will support who ever the nominee is in 2016.
Something else suspicious occurred recently.  The filing deadline date for the South Carolina GOP primary was moved up to September 30th, 2015.

Traditionally, the filing deadline for this primary drops in November.  Prior to the date change, the SC deadline was on November 30th.
The filing fee for the primary is a whopping $40,000.  There is also a loyalty pledge that candidates must sign upon filing that states their support for the nominee in the general election.
https://www.scgop.com/2015/08/25/press-release-scgop-presidential-filing-form-includes-party-pledge/
From what I have heard, such filing changes are usually not made by the South Carolina Secretary of State. They are made by party hierarchy, the Chairman of the RNC and state GOP leaders.
I believe the filing deadline was moved up in order to discourage others from entering the race  and to winnow down the field of those in the race who do not have the proper organization or the 40K to file in this important state.
Look, the GOP establishment was never comfortable settling in with Jeb Bush.  They were trying to get Mitt Romney to reconsider and run again for about a year.   On September 1st--the same week that Trump signed the GOP pledge and around the same time the SC filing deadline was changed-- longtime Romney hack Eric Fehrnstrom went on CNN and said that Romney is not reconsidering another run.
If Romney was really reconsidering, or if the GOP had someone else in my mind to enter the race to chip away at Trump, why would they move up the deadline in an important primary state for which it would make it harder for any Trump alternative to enter the race?
The only conclusion that I could come to is that the GOP/RNC has settled on Donald Trump being the nominee.
Remember, the GOP/RNC will always back and promote the moderate liberal leaning candidate.  There is no one in the race who is more of  a closeted liberal, with no record of conservative bonafides in his life, than Trump.
Trump is also popular and could raise money for the party. Trump has also accomplished something that both Bush and Romney cannot do.  That is, he has managed to fool a majority of conservatives--even prominent ones-- into believing he is one of them.
When you really think about it, it's a match made in heaven.
Something else to think about.
The three front runners in the race right now are as follows:
Trump who had Bill & Hillary Clinton at his wedding, donated hundreds of thousands to the Clintons & said that Bill Clinton was the best president of the last for that we had in the White House.
Carson who still will not admit that he voted for Obama in 2008 and 2012.
Bush who, on the eve of the Benghazi attack anniversary, presented Hillary Clinton with a "Liberty Medal" and who has said he considers Clinton "like a sister in law." 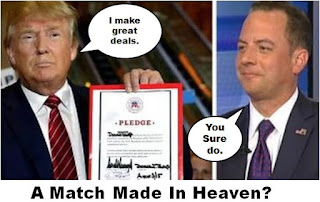