I finally got around to reading Glenn Beck's "apology" to Sarah Palin and, as I expected, it's a lot of BS.  If you missed my immediate response to Glenn Beck's initial rant against Palin and the tale of Glenn's terrible, horrible, no good, very bad day at the Stop Iran Rally last Wednesday please listen here.

Beck claim: "I stand by all of my comments on Sarah Palin EXCEPT when I called her a clown. It was unkind, childish and wrong of me to name-call. What I should have said is this: I don’t know what she really believes. I don’t think she is who I thought she was and haven’t for some time."

I will re-state what I said in my audio response. Glenn, you do not know who Sarah Palin is or  what she believes because you never bothered to look.  From listening to your show in the mornings way back when Palin first came on the scene, I cannot recall you ever talking about her exemplarily record as an executive in Alaska either as Councilwoman, Mayor, Commissioner or Governor.  You just heaped a lot of superficial praise on her, calling her George Washington, and trying to use her star power to advance your own agenda.

Beck claim: "When I saw her interview Donald Trump on her TV show I was stunned. Not that she interviewed him, but that she agreed with him and backs him."

1) Palin has not formally backed Trump. She has said nice things about Trump. I suspect that is because the two have remained friendly with each other since their meeting in New York City in 2011.
2) Palin had on her week long One America News show Jeb Bush, Ted Cruz and Rand Paul.  She agrees with these men on many issues too.  Does that mean that she is backing them too?
3 )Ted Cruz has shown the same kind of admiration for Donald Trump as Palin has. Cruz has said the same kind of things in praise of Trump's campaign as Palin has.  Cruz has met with Trump several times as Palin has.  Ted Cruz is currently in the race and Palin is currently not in the race.  Many of Cruz's supporters have resigned to the fact that it may not be possible for Cruz to win the nomination, so they're hedging their bets in the hopes that Trump picks Cruz as his VP.

Why do you not have a problem with all of this about Ted Cruz and Donald Trump Glenn?
Oh, that's right.  Ted Cruz is your newest flavor. He is your current dog in the hunt. So you'll conveniently look the other way at his transgressions and his dealings with The Donald while bashing Palin for hers.

Beck claim: "I haven’t had a relationship with Sarah since about the time of the shooting of Gabby Giffords. Nothing to do with that at all..."

Nah.  It's not quite that simple.  You never even bothered to defend the woman who you called "your friend" when she was being blamed for the attempted murder of a Congresswoman and several others in 2011. You simply sat on your hands while she was crucified by the media and the left for horrendous murders that she had nothing to do with.

Beck claim:  "I don’t know what they (the Palins) were told or by whom, but I can guess, as it most likely was the same person that tried to drive a stake through my relationship with Mark Levin and Sean Hannity and did for several years."

You're a total coward. Why do you not give the name of the person who tried to drive the stake in the relationship between you, Palin, Levin and Hannity?  I'll do it for you.  The person who you are referring to is most likely the late Andrew Breitbart.  Breitbart was the only person that I could think of who had shared with you a mutual relationship with Palin, Levin and Hannity.
Conveniently for Beck, Breitbart is not with us anymore to respond.
I see you're screwing him once again while he lay rest in a grave.

Then, after a long list of problems that he has with Trump -- a list that I happen to agree with him on-- Beck claims:

"I do not understand her position and love of Trump. He is clearly a progressive, not a small government constitutionalist. As Sarah Palin holds a unique place with the Tea Party, I expect more from her. Perhaps this is wrong of me. To support Trump and ignore his very disturbing policies makes you a populist at best. But I am almost alone in this it seems. At least with almost anyone in my job. Maybe they all have a personal relationship with him or I am just wrong."

Again, why do you not have the same problem with Senator Ted Cruz? Like Beck said himself in this so called apology, he is confused over Palin's "love affair" with Donald Trump. He should be as much, if not more, confused over Cruz's love affair and alliance with the fuzzy haired fraud.

Beck claim:  "My – unrighteous – anger came from her speech at the Iran rally."

Really? It was probably the best speech at the rally that day.  I thought it was reminiscent of her speech she gave in Madison, Wisconsin in 2011.
To those of you missed it, please watch here

Some take away lines:

"The blood of U.S. soldiers is on the Ayatollah’s hands and we dare shake that hand in negotiations? Our sons and daughters sacrificed in Iraq .. and they’re there to disempower the extremists in their neighboring crazyland, Iran. Yet the white flag was waved at the table in these negotiations because Obama had a squishy objective to start with, instead of our solid rock objective to put America first."

"Obama is standing by with his mighty phone and his mighty pen in case they stretch the truth a little and they start dropping bombs. No, only in an Orwellian Obama world full of sprinklie fairy dust blown from atop his unicorn as he’s peeking through a really pretty pink kaleidoscope would he ever see victory or safety for America or Israel in this treaty. This treaty will not bring peace. You don’t reward terrorism! You kill it!"
"You don’t lift sanctions! You crack down on their assets! You cut off their oil and ‘drill, baby, drill’ for our own! We don’t retreat. We reload against any foe willing to test us. And that is what Iran just did. They tested us.
So Congress, you gotta kill the deal. The president is playing you Congress, again. He so disrespects you Congress.. and our constitution, that he won’t even bring the treaty to you wholly.
You can’t this time Congress, ‘gotta pass it to see what’s in it’. Not this time."

That's what set off your unrighteous anger?  Hey....smell that? It smells like bullshit!

Beck claim:  "I do hear her speak sometimes and I don’t know what I saw in her."

Now remember, this is supposed to be an apology.  Would you include something like that in an apology to someone you offended?   It's clear from that comment that Glenn is yet another one of these people in our movement who is caught up in HOW people say things rather than WHAT they are actually saying.

It's one of the reasons we cannot have nice things.

Beck claim:  "I don’t have a relationship with her and most likely now never will. That is okay, she is not losing any sleep over this, I am sure."

Beck likes to make it as if he wanted to make amends with Palin and he just didn't have the opportunity.  Beck had an opportunity to approach Palin at the birthday celebration for Rev. Billy Graham in 2014.  There is video of Palin's speech in honor of Rev. Graham. If you watch carefully you will see Glenn Beck cavalierly studying his I-Phone and not paying much attention to anything that Palin had to say.

Fact of the matter is, Beck or anyone in his circle of psycho never wanted to reach out to Palin and make amends.  And bingo! Beck is right. Palin is not losing any sleep over this. I'd bet my life on it. If I was advising her I would tell her to steer clear of your kooky and hyper- dramatic ass now and forever.

I called it years ago even before he stabbed Palin, Breitbart and others in the back--- Beck is a phony and a fraud.  He is a man who wraps himself up in religious piety, populist speak, claims to preach love and unity, but underneath it all he's a petty, divisive and vindictive man who should take his own advice and leave the media and public life. 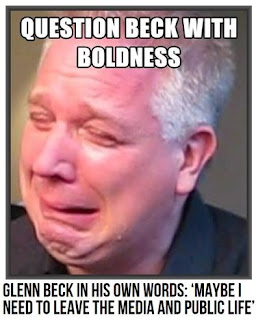 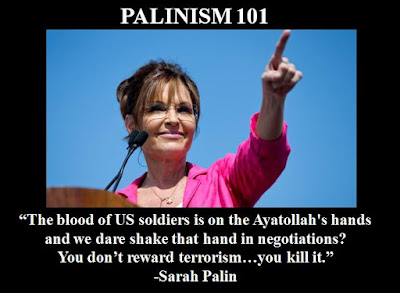