Do You Know The Whole Story About How Dinesh D'Souza Was Sent Up The River?

At CPAC 2013, Sarah Palin gave a speech that took shots at Karl Rove and the political consultant class who Pat Caddell accused of being "racketeers" and nicknamed them CLEC–the consultant, lobbyist, and establishment complex.

In her speech, Palin said it's time to furlough the consultants.  She urged conservatives to end the top down approach to picking candidates, to tune out  pollsters, and send the focus groups home.
Palin said, “If we truly know what we believe we don’t need the professionals to tell us."

She has been sounding the warning bell on the permanent political class and CLEC ever since.
Did the 2016 field listen to her warning? No.  Every one of these 2016 presidential campaigns are lined with unscrupulous political consultants. Every one. Including Ted Cruz. Including Donald Trump.

By now you know about what happened to conservative writer and filmmaker Dinesh D'Souza. D'Souza went to prison when he was found guilty of violating campaign finance laws.  Was the reason that D'Souza was targeted by Obama and Eric Holder out of revenge for D'Souza expose films about Obama and his radical associations on the left?

Yes and no. Allow me to explain...

In D'Souza's newest book "Stealing America" the author discusses in detail about his crime, trial and incarceration.  D'Souza admits that what he did was not only illegal, but downright stupid.  But he is also aware that, under Obama, Lady Justice tips to favor friends of the administration and to crush its enemies.  How else could we possibly explain why an author is thrown in jail for a petty campaign finance law violation, meanwhile, Jon Corzine steals $1.5 BIL from customers of MF Global and does no prison time?  Very simple-- Corzine was a major financial bundler for Obama's presidential campaign.  That's how he got away with his theft.

D'Souza's crime?  Here's how it goes: Wendy Long, an old and close friend of D'Souza's from his Dartmouth days, was running as a Republican for Kirsten Gillibrand's Senate seat in New York.  D'Souza wanted to help out his long time friend financially, but he could only donate a certain amount of money at a time due to campaign finance laws.  So he asked his personal assistant, who was also supporting Long's run, if he would be willing to donate to Long's campaign under his own name and then D'Souza would reimburse the money back to him later.  The assistant agreed and that is how D'Souza wound up incarcerated.

Again, D'Souza writes that he cannot believe how someone as smart as he could be so stupid at the same time. His criminal defense lawyer would later explain just how stupid his crime was.  The legal way that D'Souza could have donated to Wendy Long was through a PAC. That is the way certain people like George Soros, Warren Buffett and the Kochs are able to donate tens of millions of dollars to their preferred candidates.

But just how did  Preet Bharara, the US Attorney for the Southern District of New York and the federal government, find all of this out?

Well, let us return to our main theme and Sarah Palin's years long clarion call about the dangers of hiring political consultants.  D'Souza strongly believes that a campaign consultant tipped off the authorities about his campaign finance activity.

Wendy Long would eventually reveal to him that she had been having problems with a few of her campaign consultants. Long eventually lost her Senate campaign and, as usual with failed campaigns, they often have trouble paying off their bills. Of course, high priced political consultants don't like this, and it is likely that Wendy's troubles with her former consultant was over money.  One particular consultant became so disgruntled that he threatened to harm Long and anyone who was close to her.   It's highly likely that this consultant, who is not named in this book, dropped a dime on D'Souza.

When we hear of D'Souza's story, common knowledge is we know that what he did was stupid and illegal. We also know that what he did gave the Obama administration a perfect opportunity to make an example out of one of their biggest foes.  But what many do not know is what got the ball rolling in the first place. It was most likely a disloyal, selfish, disgruntled, unscrupulous SOB of a political consultant.

Ladies and gentleman, this consultant is who Sarah Palin has been warning about for the past couple of years. They can be destructive to a political campaign and also downright dangerous as they can threaten a candidate and, in Long's case, have her long time friend sent to prison.  I could only wonder just who Long's former consultant is and what campaign he/she is working on today.

It is really a mystery to me how some of these consultants keep getting hired and how the current field of 2016 presidential candidates-- all of them--have allowed these Benedict Arnold vermin whores into their campaigns and near their families and close personal associates.

If Sarah Palin never runs for office again, I would bet one of the reasons being is she does not want to have these Benedict Arnold vermin whores involved with her campaign and anywhere near her family and close personal associates. 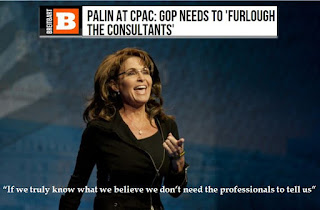